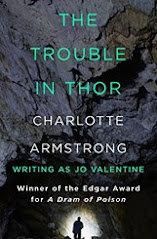 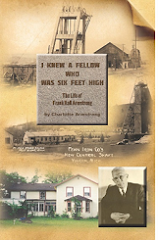 We discuss two very different books but with a common theme.

The Trouble in Thor (1953) was written by Charlotte Armstrong, but upon the advice of Brandt & Brandt, her agents, under a pseudonym, Jo Valentine. The reason for this deception is that Armstrong was at the peak of her reputation as a mystery/suspense writer and this book did not fall into that category, so the agents were afraid it would hurt her reputation.

The story is based on Armstrong’s childhood life, growing up in the mining community of Vulcan, on the Upper Peninsula (the “UP,” as the natives call it) of Michigan. Her father, Frank Armstrong was the chief engineer of the coal mine there. This leads us to the second book, I Know a Fellow Who was Six-feet High. This is Armstrong’s loving biography of her father, written in 1956 shortly after his death as a memorial. This story languished as an unpublished manuscript until residents of Vulcan and nearby Norway, MI and, through the local Jake Menghini Museum in cooperation with her estate, published the book in 2011.

We pair these stories because it’s hard to tell one from the other as they both have intimate details about the coal mining business as practiced in the first two decades of the twentieth century. But the joke is really on her agents, as The Trouble in Thor does turn out to be a story of significant suspense as several miners are trapped in a mining disaster and while it is thought that several may have died, it isn’t known who until the end. As reprinted after Armstrong’s death, the book was renamed And Sometimes Death with a tag line, “a story of violence and love,” This paper-back reprint outed the author as Charlotte Armstrong.

In 2008, in conjunction of a weekend called the Charlotte Armstrong Festival, local residents put on a dramatic reading of this local tale that was a big hit because of the local interest.

The Armstrong biography is not only about Frank Armstrong, it serves as a biography of Charlotte with her usual attention to detail.

Both books are  now available as e-books on both Amazon - Kindle and Barnes & Noble - Nook.