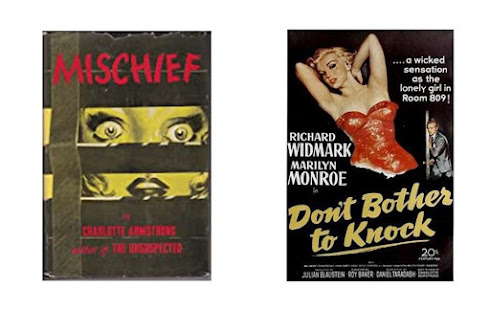 Mischief is probably best known because of Don’t Bother to Knock, a movie made from the book that featured Marilyn Monroe in her first role where she was one of the featured actors (along with Richard Widmark). From Rich Cypert’s Virtue of Suspense, we learn of the difficulty in selling this story to leading magazines or even to a movie studio because of their ultra-caution about publishing a story about a mentally deranged babysitter. Nevertheless, persistence by Armstrong’s agents resulted in the movie, Don’t Bother to Knock, made by 20thCentry Fox and serialized in Good Housekeeping.

Cypert writes: “In Mischief, parents staying at a hotel leave their young daughter in care of a baby-sitter who turns out to be mentally unstable. The protagonist, Jed Towers, who meets the baby-sitter by chance, soon realizes, “She was not a type he knew.’ Although a cynic about the world, Towers wants a ‘touchstone,’ to believe in people the  way his mother who  mother who “talked love—was love” did. When matters get out of hand, Jed extracts himself from the situation, but in the process of leaving the hotel, he has his epiphany, asking himself, "What kind of rat did such a thing?" This epiphany eliminates Towers’ earlier rationalization of his behavior and allows him to test his true mettle.”

The book was released in 1951 and, despite difficulties in selling the plot, the movie was released in 1952, before Marilyn’s affair and marriage to Joe DiMaggio. The move had quite a cast in addition to the featured stars, such well-known actors as Ann Bancroft, in her first movie; Jim Backus, of Gilligan’s Island and Mr. Magoo fame; Jeanne Cagney, Jimmy’s sister; Donna Cochran, Make Room for Daddy; Verna Felton; Lorene Tuttle and Elisha Cook, Jr.

Despite Marilyn  and a stellar cast, the movie did not fare well to many critics and the box office, but later on more than one critic thought it to be a movie that showed Monroe really could act. Rotten Tomatoes which is the leading aggregator of movie reviews gave the movie a rare 100% positive score.

During the filming, all of Armstrong’s children had chances to meet the famous actor while filming. All agree she was drop-dead gorgeous and a very sweet person who showed more interest in their mother than any of them.

We all watched the very recent CNN program, Reframed: Marilyn Monroe, a documentary about her life. Her role in Don’t Bother to Knock was described as Marilyn basically playing herself as a mentally ill person due to early upbringing. We seriously doubt our mother wrote the story with that casting in mind as Monroe’s mental problems weren’t revealed until much later.

One sour note about the story: Many years after the film (1991), Fox decided to remake it as a movie for TV, “The Sitter.” It was an absolute disaster as they made Nell, the sitter, a deranged murderess. We were happy our mother never got to see this abomination and we almost returned the money.