Seven Seats to the Moon 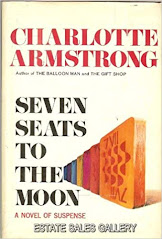 This book is unusual for two reasons: It is somewhat of a departure from Armstrong’s usual style of suspense and mystery as it borders on science fiction. The second reason is the weird coincidence it evokes as follows:

Charlotte Armstrong passed away after a six-month battle with lung cancer on July 19, 1969. Most anyone over about 70 years old will easily recall that was the exact date of Man’s first landing on the moon, and that man was Neil Armstrong, who soon became known to the family as “Cousin Neil.” We have no idea if there is any truth to that, but the idea was reinforced when we learned that N. Armstrong’s middle name is Alden and our family knows well that we are descendants of John Alden of Mayflower fame.

So putting these two facts together it was Neil Armstrong who had one of the first seats to the moon, so how clairvoyant was Charlotte Armstrong? The book was her next to last and was published on January 1 of that year, so she certainly knew of Cousin Neil’s role in that epic journey.

Another bizarre coincidence was that it was the same night of the tragic accident at Chappaquiddick. The link between that and the moon landing became better known with the 2017 movie about that accident.

But back to the story, based on the description from Mysterious Press:

California businessman J. Middleton Little is on company assignment in Chicago when he’s caught eavesdropping on a top-secret confab between high-level government officials. J. knows he isn’t just hearing things; they actually referred to the coming Armageddon. To ensure his silence, J.’s been offered the chance of a lifetime: seven seats on an “ark” scheduled to carry the last vestiges of the human race from Earth before the apocalypse. In a matter of minutes, J. has gone from a self-described “middle-class, middle-income, middlebrow man-of-the-street” to one of the most privileged men in the universe. The only stipulation: He can’t tell a single soul until the proper time.

For now, it’s back to life in Burbank with his dutiful, intuitive wife; an underhanded and scheming son; his impossibly spoiled daughter; his unhinged father; and a mother-in-law whose religious fanaticism is making J. think twice about his role as savior—especially when he finds himself shadowed by an insidious pack of secret agents, counterspies, and a lone madman on a terrifying mission.

All in all a great read for any fan of Charlotte Armstrong.