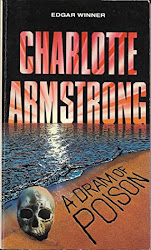 This novel is one of Charlotte Armstrong’s best. We judge that based on the fact that it received the prestigious Edgar (as in Edgar Allan Poe) Award, an annual award for the best mystery novel of the year. It is an unusual story as there is no victim and no crime. Yet, Armstrong manages to weave her magic and create a suspense-filled story how we are going to avoid a terrible accidental death from a deadly poison. It is also a story how total strangers come together and by combining their wits and skills drive to successful conclusion. It is also one of only four books that were dedicated. More on that later.

A Dram of Poison (1956), despite its serious central situation, is a comic novel, with an unlikely set of characters uniting in a common purpose and discovering in the process much that is admirable in each other.[1]

Her Edgar award winning novel A Dram of Poison (1956), about a bottle of poison that inadvertently gets left on a bus, can't really be called a crime novel as I see it (there is really no intended crime to speak of)--though it certainly is suspenseful (and it was marketed as "a novel of suspense").  Rather, I find it simply a marvelously humanistic tale about the foibles of men and women.[2]

Here is the plot synopsis as noted in Mysterious Press.

For fifty-five years, Kenneth Gibson has lived in backwaters. A former army clerk, he makes a quiet living teaching poetry to indifferent undergrads. His life is happily dull until the day he meets Rosemary, a damaged girl whose frailty compels Kenneth to try to make her well. They wed, and as Rosemary recovers from her depression, Gibson falls in love, transforming his world. But his wife will never love him.

She is smitten with their landlord, a dashing young chemical engineer named Paul. Gibson wants to let her go, but he cannot bear to be parted with the first love he has ever known. In Paul’s house is a case of poison, and this love triangle can only end in death.

In 2019, this story was optioned to Skalar, a German feature film producer. After struggling to find financing, their efforts ground to a halt in 2020 due to the COVID 19 pandemic and, in August 2021, they, reluctantly abandoned their efforts. So, now rights to the property have reverted to the author’s estate and are available to some other aspiring film producer.

The dedication of this book arose when, at the last minute, Armstrong remembered to dedicate the book to her housekeeper for her devoted service to humor and joust with Armstrong’s elderly and frail father-in-law living in the Lewi house.