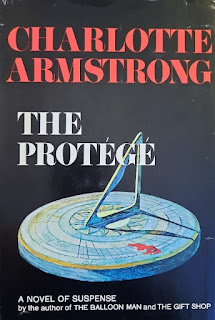 The Protégé was Charlotte Armstrong’s last book. It was published the year after her death.

The protagonist is Mrs. Moffat, a seventy-three-year-old woman living in suburban Southern California alone except for a long-time live-in housekeeper who has become like family.

On a Sunday morning a young man in his twenties sits next to Mrs. Moffat at a church service. He knows her name, but she doesn’t recognize him. As they emerge from the church he introduces himself as Simon Warren, the son of her neighbors who was the best friend of her grandson Tommy Moffat who has been missing for seven years.

Rather than a Who Done It? The story is a Who Is He? as to Simon and a “Where Is He? as to Tommy. Simon ingratiates himself with Mrs. Moffat and after helping to fix up a cottage in her back yard ends up moving into it at first “temporarily” but then for an extended stay. They develop a cordial  relationship even sharing meals on the porch at the main house.

Mrs. Moffat starts to have questions about Simon’s real identity. He turns out to have ulterior and largely financial motives. Mrs. Moffat’s granddaughter-in-law Alexandra (known as Zan) comes to visit. She had been married to Tommy Moffat who is now assumed to be dead. She becomes very suspicious of Simon and gets her boyfriend Nicky involved in trying to figure out what is really going on.

So as not to be a spoiler we won’t go any further except to say that like so many Charlotte Armstrong stories, The Protégé culminates in a dramatic ending pulling together clues sprinkled throughout the book and answering the questions about both Simon’s true identity and  what has happened with Tommy.

There has been speculation as to the degree to which the story could be autobiographical given the fact that our mother was close to the age of Mrs. Moffat when she wrote the book. As people who knew her very well we can say there is definitely a lot of our mother in Mrs. Moffat. We believe she was trying to dispel any notion that “older” women are not as sharp as they once were. Mrs. Moffat turns out to be extremely intuitive, wise, and very good at piecing together clues and resolving mysteries. Her age comes with wisdom and is far more an asset than any limitation.

It is interesting to note that in her final book our mother at least partially reverted back to her earliest stories in the mystery genre as opposed to her later stories which were more about psychological suspense.

The Protégé is a wonderful yarn befitting a long successful career of an extraordinary author who was has been dubbed “The Queen of Suspense.”